In 1960, Ann Legon was a stage-struck teenager whose dreams were about to come true…

It’s June 1960, and I’m a 17-year-old, standing on the stage at the Palace Theatre, Westcliff, being kissed by a tall, handsome, young man. How did this come about?

My parents were born in Southend-on-Sea. My father was a designer-draughtsman and during the war he worked on jet engines in the Coventry area – we were always led to believe he was working with jet pioneer Frank Whittle but, as Frank was RAF, I am not too sure whether fiction has somewhat overtaken fact, but he definitely worked with him after the war. My mother was evacuated to Winsford in Cheshire where I was born: delivered, I was told, by my grandmother in the middle of an air raid. (Later, when I researched the Winsford air raids, it transpired there had been none, so perhaps I had been born in the middle of a false alarm which just about sums things up! I think my family enjoyed a good story which improved with the telling!)

Mum eventually returned to Dad in Coventry, where my brother was born, and the family moved back to Southend in 1952. I had just passed the 11+ and was transferred to Westcliff High School where my Midlands brogue caused much merriment!

As a little girl I was always dressing up and putting on plays for my long-suffering parents and friends. I just loved anything to do with the theatre. Something needed to be done and I was sent to the Ridley Studios, then in its infancy and run by the inspirational Peggy Batchelor, who was entrusted with the task of smoothing the rough edges off this skinny little schoolgirl. There I found myself in my element.

In those days Peggy held classes at her Leigh-on-Sea home and I remember the kindness of her parents. My Midlands accent diminished and I made special friends with two pupils, Yvonne and Sandra – where are they now, I wonder? We performed in local festivals and one year I won a prize for reading poetry. My services were also ‘loaned out’ to the local WIs and similar groups when a young girl was required to act in a play they were producing.

One year Peggy invited the three of us to go on a residential drama course being held at a country house in Thaxted, Essex – we were so excited. A play was written especially for us by author John Holland (coincidentally I was much later to marry a man with the same name) and over the Bank Holiday weekend we learned our lines, made costumes, painted scenery and performed to an audience. 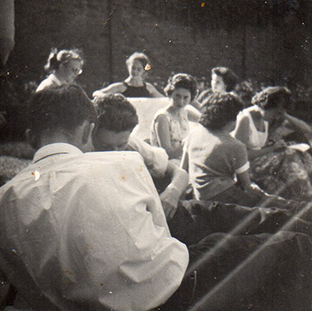 This was the most wonderful weekend of my young life and on my return home I immediately joined a local amateur dramatic society.

Here I am in Great Catherine, being roughly handled (first photo) and in the doorway (second photo), and in The Italian Straw Hat (third photo) in the centre just underneath the hat boxes. Memory fades over the years and if anyone can place this drama society and where these plays were performed I would be interested to know c/o David Simpson, Palace archivist.

Every Saturday, Yvonne, Sandra and I would take the train up to London and go to the Old Vic matinee. We were fortunate enough to cover the 1955/56 season with Richard Burton and John Neville. I don’t think we missed a play and we saw Richard and John dual role as Othello and Iago. We made a point of arriving early and would hang around the stage door – everyone spoke to us and some of the actors got to know us by name! Richard Burton and his then wife Sybil Williams were very generous with their time and we obtained autographs from everybody. It never occurred to us that that we were walking the path of theatre history and should have taken photographs.

It was a privilege to meet and see so many famous actors: Claire Bloom, Zena Walker, Corale Browne, Wendy Hillier and Barbara Jefford to name but a few. Greedy for more, after the matinee performance we hurtled along to Shaftesbury Avenue. Being Saturday night most theatres were sold out apart from a few seats in ‘the gods’ which were released a few hours before the curtain went up. We always joined the shortest queue but, even so, sometimes reached the box office when the last seat had been sold. But then, more often than not, we were allowed to stand at the back – can you image that happening today with all the Health and Safety rules?

At the Royal Court Theatre I remember seeing Joan Plowright when she first came to notice, receiving rave reviews for her performance in William Wycherley’s The Country Wife, and being at the Saville Theatre for a performance of Sheridan’s The Rivals with John Clements, Kay Hammond, Athene Seyler and Laurence Harvey, who arrived at the stage door in a yellow Rolls Royce!

It was at the stage door of the Saville Theatre that we met Sir Lewis Casson, husband of Dame Sybil Thorndike. He was appearing with Paul Daneman in George Bernard Shaw’s The Doctor’s Dilemma. He was interested in our adventures and amazed when we told him we still had to catch the last train back to Southend.  I remember him saying, “I wish there were more like you.”

Most of my pocket money was spent on the Saturday trip but I always managed to save 1/6d for a balcony seat, as the gallery was called in those days, for my weekly visits to the Palace Theatre.

Once in a while, the Arthur Brough Players, the resident repertory company, would have a famous guest artiste. Sabrina Fair, later to be made into a film with Audrey Hepburn, Humphrey Bogart and William Holden, was to be staged and popular film and radio star Paul Carpenter – who could forget him as Larry Duke in the film Stock Car or as the cowboy Jeff Arnold in the radio series Riders of the Range – was to play the lead. Imagine how I felt when Peggy asked if I was interested in a walk-on part. 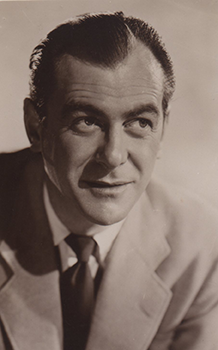 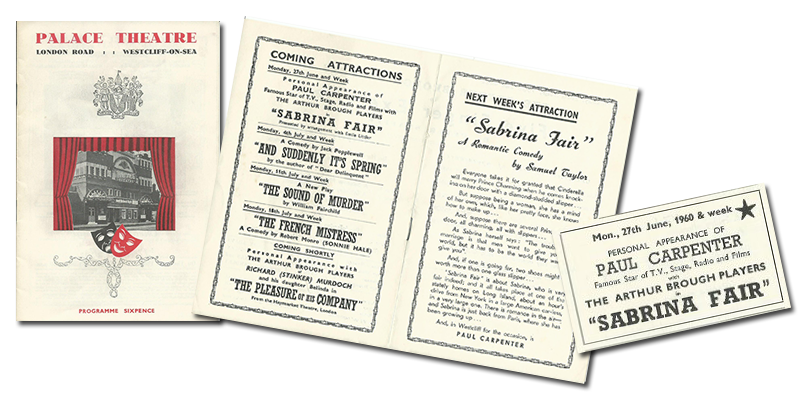 I shall never forget the excitement of my first rehearsal. Grasping my little cream leatherette vanity case I went up the metal stairs feeling like a real actress. Initially, I was very shy and in awe of everyone, but I was made very welcome. I was introduced to Paul Carpenter. He was tall, dark haired and wore stone coloured boots which impressed me very much. Of course, there were no wages and I had to provide my own costume, so I wore my best dress, which was a jade green silky material with layers of frilly petticoats.

The dressing room was a bit like a cheerful public lavatory; cream painted brick walls with a red border. It was here with the rest of the cast that I slapped on the Leichner 5 and 9 greasepaint and sneezed my way through copious amounts of face powder. Against the wall a full length plate glass mirror with a huge chunk out of the corner listed dangerously. Health and Safety today would have had a blue fit!

I wasn’t provided with a script and just did as I was told. It wasn’t until I saw the film years later that I understood the actual scene! Paul Carpenter was on stage and I entered looking for my boyfriend. He pointed and I followed his direction. My boyfriend then entered looking for me and Paul pointed him in the opposite direction – the audience loved it and howled with laughter. It ended up with us finally meeting and kissing centre stage. My boyfriend, played by Stephen Yardley, who was later to find fame as Ken Masters in the TV series Howards Way, was also the ASM [assistant stage manager] and took his duties very seriously. I didn’t let on that although it was just a stage kiss it was the first time I had been kissed! 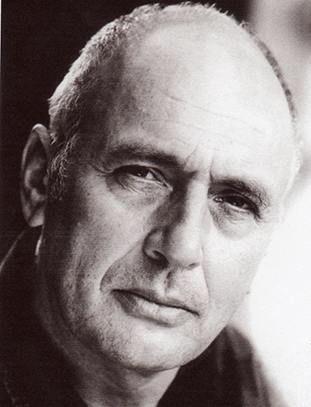 Stephen Yardley kindly sent me this photo of him today

My ‘boy-friend’s’ credit as an assistant stage manager

During rehearsals one day, I couldn’t believe my ears when Paul asked me if I fancied an afternoon out. In the taxi, with my father’s many warnings ringing in my ears, I was beginning to have second thoughts. However, when we arrived at his hotel to my relief he left me in the bar with a glass of lemonade and went upstairs to change. It was a very embarrassing wait as everyone was staring at me. On his return he summoned another taxi which took us along the seafront to an amusement arcade, where we played bingo all afternoon! We became great mates and did this every afternoon for the run of the play.

The opening night was thrilling, and at every performance the auditorium erupted into loud applause whenever Paul walked onto the stage. I couldn’t keep away from the theatre and would go and watch rehearsals for the following week.

One morning I was handed a letter – fan mail? It was from the stage magazine Spotlight, requesting my photograph and availability for future work – I was thrilled as I had just had some photos taken and I sent them off by return, although this fizzled out and didn’t lead anywhere. 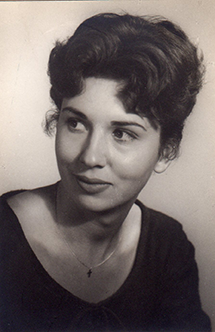 One of the photos I sent to Spotlight

The last night came all too soon. The cast gave me a large box of chocolates as a thank you. Paul Carpenter kissed me on the cheek saying, “Thank you, pretty child, you have been great fun. Take care.”  I was only to see him again on the screen and sometime later [June 1964] the newspaper headlines announced he had died.

Back to reality, there were exams to be passed and I became a trainee hotel receptionist at the Westcliff Hotel. This was not what I wanted. On a visit to Portugal I met my husband John Holland, a sailor, writer, TV/film actor. We were eventually based there for nearly twenty years until his death in 2000.

Even though my theatre adventures were a long time ago I still treasure memories of that very happy time in my life.

Archivist David Simpson adds: A shorter version of this article appeared in issue 204 (published in October 2014) of the fortnightly magazine ‘Yours’. When Annie was commissioned to write it she contacted me for details about the Palace and, specifically, the production of Sabrina Fair. We enjoyed the shared experience of researching the project although sadly, despite all the programmes we have, we do not have one for that play (the extracts above are from adjacent programmes).

Annie also contacted Stephen Yardley, who played her boyfriend. Despite the stage kiss making such an impression on Annie, Stephen now has little recollection of that play. However, he did kindly provide the photograph that appears here.

It was a real pleasure collaborating with Annie, and I am very grateful to her for allowing her lovely reminiscences to appear here.

Nowadays, Annie is best known for her books for children, particularly the “Stella the Stork” series. For more information please see: 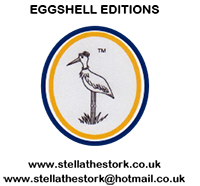